I’ve been addicted to all those shows in the faintest hope that somebody someday would stumble across a vintage toy from my youth. Just one ThunderCat.

But nobody ever does. And then I have to watch a bunch of fat guys swoon over 1940s oil cans and scraps of paper Lyndon Johnson might have touched.

But Toy Hunters—which just debuted on the Travel Channel of all fucking places—fires directly on my nostalgia synapse.

If you have basic cable, you’re already painfully familiar with the premise of shows like this: an excitable expert  travels around the country looking for hidden treasures. But instead of barns full of rusty bicycles, he ventures into garages full of mint-in-package, original M.A.S.K., Star Wars and Gremlins toys.

It’s like TV was invented for the sole purpose that I would one day be able to watch this show.

I’d like to tell you when you can see it, but for some reason, the Travel Channel in its infinite wisdom seems far more interested in rerunning episodes of When Vacations Attack than they are in picking up Toy Hunters as a full-on series.

And now I already miss it like I miss my StarCom F-1400 Starwolf. (Which, if you’re ever looking for a Christmas present for me…)

Since there aren’t even any YouTube videos of Toy Hunters to show you, I decided to make a list of the top 10 toy lines from my childhood that make me wish I could go back to 1987 just to bring some back with me Martin Seamus McFly Sr. style:

10. Masters of the Universe 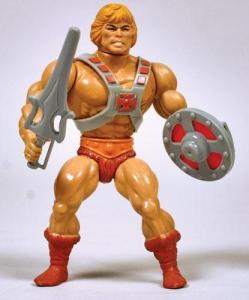 They didn’t exactly set up a realistic body image for impressionable boys, but I definitely have these toys to thank for my muscular calves.

Acronyms were all the rage in ‘80s boy stuff. And even though I never owned a C.O.P.S. (Central Organization of Police Specialists) toy, the Bullseye figure was the S.H.I.T.

You really couldn’t appeal to the 8-year-old version of me any more than with an elite group of heroes that can fly through space in nothing more than form-fitting metallic suits. One of them even played electric guitar. 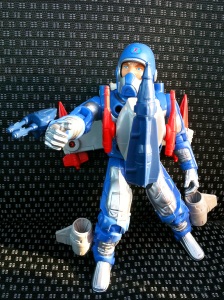 Cartoon characters and their respective toys in the ‘80s were pretty single-minded when it came to their specialties, and Centurions are the perfect example of it. Each of the three Centurion team members had accessory-heavy exoframes that matched up with their conveniently expository names. I was real big on any character that wore blue or could fly. And Ace McCloud satisfied both those. (My poor little brother had to like Jake Rockwell by default. Guess what his specialty was.)

When people think of Voltron, they always think of the fully assembled robot guy. But unless you had all five individual lions, you were left with just the one awesome mechanical lion that also happened to turn into an arm or a leg. It’s really kind of genius. You can’t enjoy Voltron toys to their fullest retail potential unless you buy them all. I managed to get three. (My poor little brother had to like the dumb green and yellow lions by default.) Together, we formed Voltron.

I remember one birthday when my mom had a surprise party for me at McDonald’s (back when they were doing parties) and I got a shit-ton of ThunderCats and it was the best birthday I ever had. 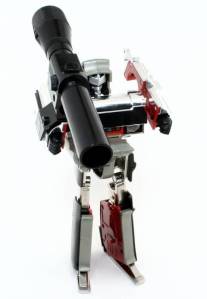 Way before Shia LeBeouf got involved, these toys were the pinnacle of toy technology. Although nobody’s really been able to explain to me how Megatron goes from a full-sized robot into a gun that other full-sized robots can hold. 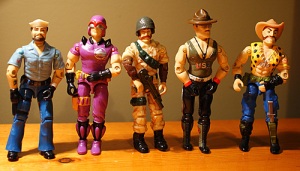 G.I. Joes were like Facebook before there was Facebook. Instead of having digital representations of ourselves, the best you could do was find the G.I. Joe that best matched your personality and latch onto him or her. And if your personality involved an affinity for nunchucks, you were probably in luck. 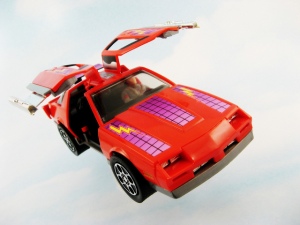 These intricate toys with motorized (noisy) action and Magna Power (aka magnets) came along right at that point in my childhood when I realized I needed to take care of them and when I had enough disposable income (money I could afford to throw down the toilet in experiments) to assemble an impressive collection. I kept meticulous records of what I had and what I needed, and even stored all of the toys in their original boxes. But at some point, the biggest mystery of my life unfolded: One minute, they were organized alphabetically on my dresser. Then all of a sudden 12 years later, they were gone forever. I have no idea when or why I eventually moved them somewhere outside of my constant eyesight, but I think I know who to blame:

3 thoughts on “I Just Realized I Love: Toy Hunters”